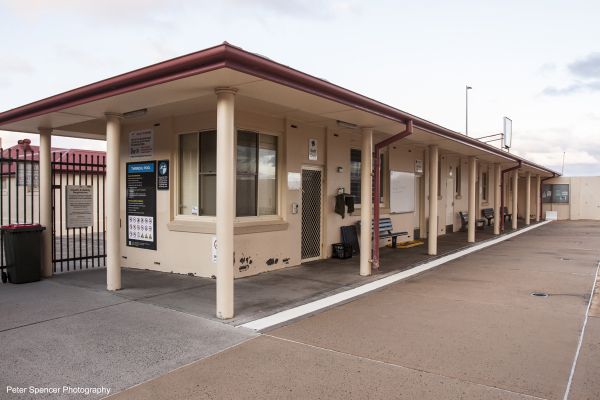 Thirroul’s original swimming pool was situated at McCauley’s rocks, just south of the present-day pumphouse.  It was a tidal pool cut into the rocks with a stairway built onto the rocks to provide access from the cliff above.  The rock pool opened with much fanfare and a large crowd in attendance, on October 1, 1923.

The pool was very popular at the time.  However, because of its location, it continually filed with sand.  Huge seas have since demolished the pool, but signs of its construction are still evident.  Part of the original stairway can still be seen as can remnants of the concrete wall which held an inscribed plaque to commemorate the pool’s opening.

There was a tunnel in the cliff-face a few metres north of the pool’s location, leading to some conjecture as to its function.  Some say it was for local residents to access coal from the seam located in the cliff-face.  Another theory was that it was associated with the Excelsior Colliery (Thirroul Coalmine).

The lagoon was the other attraction for locals and visitors to entertain themselves.
Adjacent to the lagoon was Beach House, a very large dining and accommodation centre which attracted many holidaymakers from Sydney.  The lagoon extended from Flanagan’s Creek to Harbord Street.  Access to the beach was provided by footbridges from Bath and Ocean Streets.  In the 1930s the lagoon was filled in and drained into Flanagan’s Creek.  For a period of time the area remained idle, filling with rushes and mud during rainy periods or overflow from the sea during high tides.

A citizens’ committee was formed to raise money to build an Olympic pool and Housie (bingo) Nights were regularly held as part of the fundraising process.  Councillor L.B. Kelly (Life Member Laurie Kelly’s father) was actively involved in the scheme for beach improvements at Thirroul.  A sum of money was raised and Bulli Shire Council struck a special levy on all local property owners’ water rates to meet the shortfall in funds.

The beach improvements included a swimming pool, beach kiosk, public dressing sheds and toilets, and a beach promenade which began at the south end of the beach and continued all the way along to a footbridge which extended over the drain from the beach reserve formerly the lagoon) at Flanagan’s Creek. The north end of that promenade is still there, but was covered in  scrub and trees to prevent sand dune erosion in 1988.  The promenade was originally lit with lamp standards, which have since been replaced with floodlights.

The pool was built to full Olympic measurements with the deepest section being nine feet (2.6metres) deep and the shallow end being two feet, nine inches (0.8 metres).  The pool had an attractive coloured border in red, brown and primrose tiles; the depth of the water was marked with coloured tiles but these have since been replaced with metric measurements.

A twelve-foot (3.5 metre) concrete concourse with paths radiating to the promenade and a new road were constructed around the pool.  Water was pumped into the pool by two centrifugal pumps, with suction pipes extending 100 feet (30 metres) into the sea along a rock reef.  The pool was lit with underwater lights and lamp standards were placed around it.  The underwater lights were covered during the Second World War, and later removed altogether.

A high diving tower, a 1 metre high spring board and slippery-dip completed the main pool.  The diving tower had two three-metre platforms and a five-metre high diving platform, which was located over the deepest section of the pool on the western side.  The lower platform was later removed as non-swimmers would jump off it to the side of the pool nearest the steps, with dire results.
The slippery-dip was located at the centre of the north end of the pool with the spring board to the east.   Eventually the diving tower was completely removed and replaced with a one-metre springboard.  Both springboard and slippery-dip eventually disappeared.  The original pool complex included a wading pool, which has recently been renovated, thus enabling young children to enjoy a swim in safety.

The grand opening of Thirroul Beach improvements (swimming pool complex, promenade and beach kiosk) was held on January 20th, 1940.  The official opening ceremony was conducted by E. S. Spooner, MLA.  The Thirroul Improvements Organising Committee put out a souvenir program, price three pence (three cents) to commemorate the occasion.  An original copy of this program is on display in the Thirroul Surf Club’s trophy cabinet.

Originally the pool was completely open with no walls or fencing.  Control of the pool was administered by the beach kiosk proprietor.  There was no supervision over the pool on a full-time basis.  Also, the pumps could only be operated at high tide; the pool was emptied and filled every Sunday evening depending on the availability of the next high tide.  If the tides were not right or the seas rough, this cleaning process could be delayed.   The pool would sometimes be olive green before it was emptied.You can imagine the uncleanliness and lack of hygiene by this stage.  This directly led to some locals giving the pool a slang name of "the Polio Pit" during the polio epidemic of the mid 50's. This name remained until continuous flow system, that continually replaced the pool water, was installed.

One evening, when the pool was being emptied, a girl by the name of Eileen Martin jumped in adjacent to the outlet pipe and was sucked in and – amazingly – deposited on the sand at the end of that pipe without injury!

Southerly winds and large seas were another problem.  The eastern side of the pool would fill up with sand, requiring a major operation to remove it, which of course resulted in the pool being closed while this was done.  To overcome this problem, Wollongong Council erected
a brick wall along the eastern side of the pool; at the same time  further improvements were made to the beach reserve with the area being top-filled and made available as a picnic area.

In the late 1950s a two-shilling (20cents) parking fee was imposed on entry to the area with the Surf Club receiving 25% of the profit.  This, however, proved unpopular and the charge was removed.  Similarly, in the 1970s a controversial entrance-fee to Thirroul pool was scrapped after one season.

On Sunday afternoons during the 1950s the Thirroul Surf Club members would entertain the public at the pool with diving theatrics.  As that time the beach reserve, south of the pool, was a designated camping area and during the holiday period it became a tent city. Visitors would all turn up at showtime and watch the extravaganza put on by our showmen. Fun divers led by ‘Chicka’ Tolhurst and Bob Brownsell would put on an aerial display of frozen body positions, while the perfectionists, such as Donn Mobbs and John D. Dryden, would adopt more classical styles.  Hey – there was no television in those days!

In June 1974 huge seas breached the sea wall on the eastern side of the pool. The sea also removed a lot of sand from the beach, leaving a stony outcrop.  The concrete casing the pool outlet pip was uncovered, breaking the last section.  The sea wall was rebuilt, strengthened and returned around the Southern end of the pool complex and about ten metres along the northern end. The inlet pipes to the pumphouse were also extended so that the pool could be frequently flushed with fresh sea water.

The beach was again ravaged by wild seas in August 1978. Although the sea wall around the pool held, the washing-machine effect of the turbulent water surging around the beach completely removed all the sand from the main area of the beach. The section in front of the kiosk was clay and rock to a depth of two metres below the promenade. The footings of all the all the access steps to the beach were exposed, and the boat ramp in front of the patrol room moved 100 mm away from the promenade. Time is a great healer, and gradually the beach recovered to its pristine condition.

In 1992 Thirroul pool superintendent, Les Herbert, and his staff recommended improvements to the pool and surrounds.  Following consultation with Wollongong Council, facilities were upgraded and additions were made to enhance the appearance and convenience to the public.  Modifications included a new pool observation and staff room, first aid and emergency treatment room and shade awning.  A secure fence along the western perimeter, toilet facilities and showers were also added.  The council lifesaver observation room and storeroom were later added to consolidate all of the lifeguards into one area.

Fact or fiction?
Thirroul Pool was designed to Olympic specifications under the imperial system of measurement at that time – yards.  The pool was intended to be 55 yards long (slightly longer than 50 metres).  It was talked about at the time that the pool’s length was determined before the tiles were added, thus reducing the length of the pool below specifications.

(Editor’s note: Don Gray, writing in his memoir My Thirroul  published in 2009 stated:  “The Thirroul ratepayers agreed to a rate-rise to build these baths with the proviso that Council would never seek to charge people for their use.  Council would now like to raise charges as the pump picks up a lot of sand and requires regular expensive maintenance but Thirroul stands up for the agreement which was made between Council and Thirroul’s residents.)

The above content is an extract from the chapter headed:   “As years go by”
The Thirroul Surf Life Saving Club’s 2007 book The Blue & White Wave commemorates the Club’s one-hundred year history. 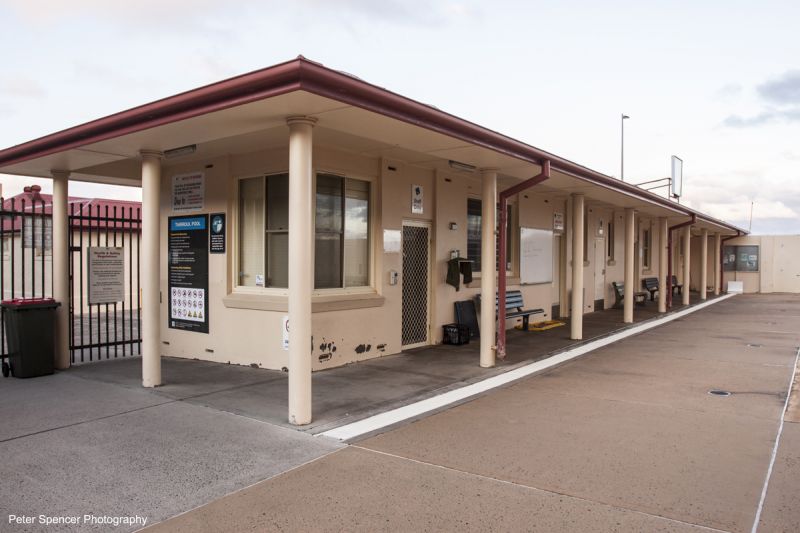