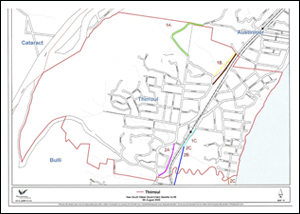 Options for roads that could be used in case of road blockages at the bottom of Bulli Pass and/or the overhead railway bridge in Thirroul.
Possible access roads for Thirroul.

1.  Alternatives in case of a blockage of the Railway  bridge, Lawrence Hargrave Drive (LHD) Thirroul

A.  Phillip Street – Foothills Road   - green
This road is marked on many maps.  It was useable up until thirty years ago.   It could be used immediately by 4WD’s.  It could be easily made negotiable in a one way direction for other vehicles.  It has locked gates at either end.
There are significant issues with this alternative.  It is single lane, steep, rough and would be a fairly lengthy bypass if the Thirroul overhead bridge was blocked.  It is a relatively complex bypass and would be difficult to signpost.

B.  Seafoam Avenue – Mountain Road  -  yellow and brown.
This also used to be open for a period of time around twenty five years ago.  .  This runs parallel with the Railway line.  There are two alternatives.  The road marked with brown on the map runs close to the Railway.  This would be the easiest, with no drainage problems. If the road was run off railway land (currently zoned 7B conservation.), it could be subject to flooding.   This road is marked as yellow.
This would probably be the easiest location to build a permanent two lane road.  This would also reduce the traffic flow though both of the Thirroul shopping centres.  It would be a convenient road for locals.  The bridge over the Railway at Mountain Road is narrow, but wide enough for two lanes.

C.  Station Street – Wrexham Road.  -  Light Blue
This would be the shortest of the Bypasses.  It would need to use some railway land.   It would require a bridge across a culvert.    Due to its proximity to Gibson park, the section appears to be too narrow for a permanent road.     The turn at Wrexham Road would be sharp.

2.  Alternatives in case of a blockage at the bottom of Bulli Pass.

A.  LHD alternative  -  bright pink
One possibility would be to consider building a permanent second road before commencement of the planned Bulli Pass flyover bridge.  This would then reduce the traffic problems associated with the bridge construction.  This is marked in Pink on the map.  I believe there is already an existing road reserve.

B.  Wrexham Road – Sturdee Avenue.  -  Dark blue
This could be completed as part of the Stocklands re – development.  The main reservations are the narrow road bridges over the railway at both ends.

C.  Combined alternative route  -  Hamilton Road -  Hill Street Sandon Point  -  Orange
This would use the existing Cycleway as an emergency road.  Part of this route is marked in orange.  The rest of the route is off the edge of the map.  This would provide an emergency bypass for both the Overhead Railway Bridge and Bulli Pass.  This would require widening of the Cycleway and the bridge across Woodlands creek.  This would be the preferred option if the long term plan is to provide emergency only access.

D.  Station Street to Sturdee Avenue
This would be the combination of 1C and 2B above.  This would meet all bypass requirements and is our recommended solution.