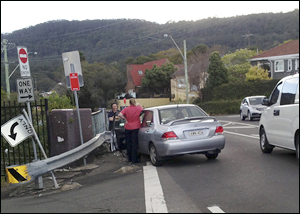 A recent accident on the Thirroul bridge, where a car demolished part of the corrugated steel pedestrian safety railing and squashed it back to the fencing has once again highlighted the inadequacies of this old-fashioned bridge.  The old level crossing by the station was regarded as unsafe by 1909 when the Railway Commissioners were seeking to obtain land on which to build, but the new bridge was finally opened in July 1916.

The central support still shows the damage done by coal train accident in 1976. (Modern railway bridges do not have any central supports.)  The brick wall sitting atop that pier is cracked right across and patched with steel angle and the fencing is torn and bent.  The footpaths have many trip hazards on their approaches, and are narrow and difficult to negotiate with strollers and motorised scooters.

It is hard to know exactly which of several administrative bodies are responsible for the general maintenance of the road, the bridge and the footpaths. A resident recently met with a representative of the RMS, to discuss the possibility of better signage to alert motorists - especially those approaching fast on the bend from the west - of the danger at this busy part of a main arterial road.  With a primary school on either side of the road, scores of children use the footpaths around the bridge, and even attempt to cross the road where visibility is limited.

Nevertheless, the Thirroul Village Committee feels it is worth bringing the condition state of the bridge and dangers to pedestrians to the notice of government, both local and state. We hope for some improvements.