Thank you for this opportunity to comment on the development application DA-2018/914 submitted for 13 Pass Avenue Thirroul. I am writing as Secretary of the Thirroul Village Committee and as such numerous local residents have expressed their objection to this D. A.

The primary concern is that this development will result in four separate three bedroom dwellings on a single 1,100 sm block of land that is zoned R2. That is, land that currently has one residence, zoned suitable for for a maximum of two residences, will now have four residences.

Could it be that that the proposed subdivision is merely a way to circumvent this zoning standard, thus profitably packing in more buildings in a way that will increase the density and degrade the liveability of this location?

Thus we will address the issues of concern via the following extracts from the Statement of Environmental Effects document for this DA as provided on the WCC website. 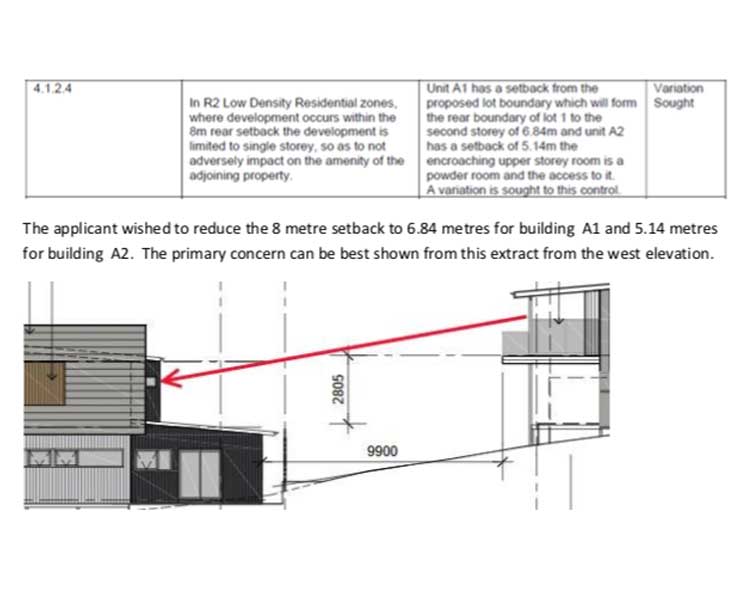 From the deck of one property, the view as shown by the red arrow will be around 16 metres and one storey down directly into the toilet of the adjoining property. It can be shown that a similar relationship exists for all four properties. The TVC believe that this setback requirement is designed to provide adequate spacing between dwellings.

Could it be that this 25% reduction in average setback is a direct attempt to over-develop this site. How will this not have an adverse impact on the amenity of neighbouring properties? 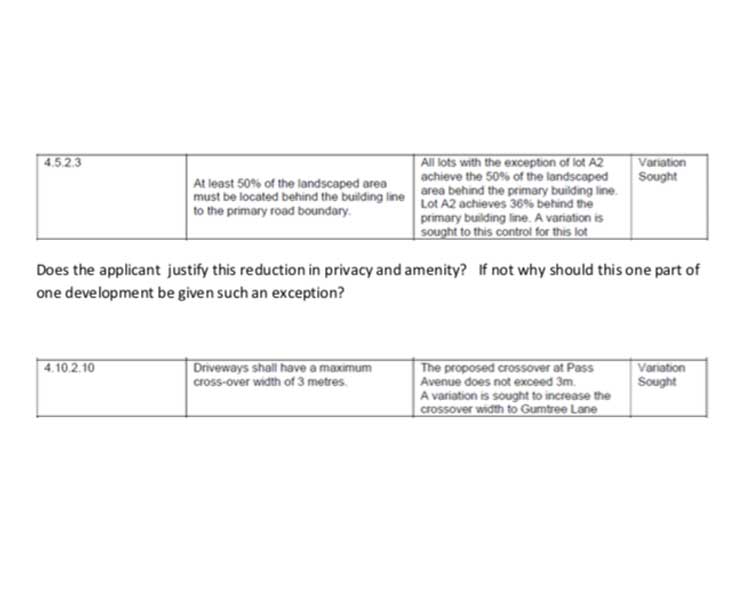 Will this contravene Australian Standard AS2890.1.?

The Applicant promotes Gum Tree lane as the primary street frontage for the two southern units. The reasons for this is summarised by the following notated google image. 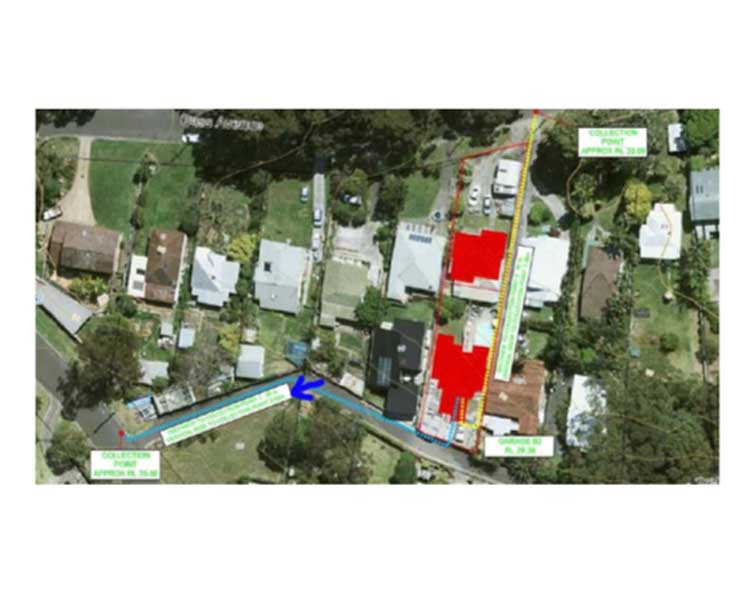 This standard Iphone picture was taken yesterday from the location as shown by the blue arrow in the google image above. It shows the last 40 metre section of laneway. 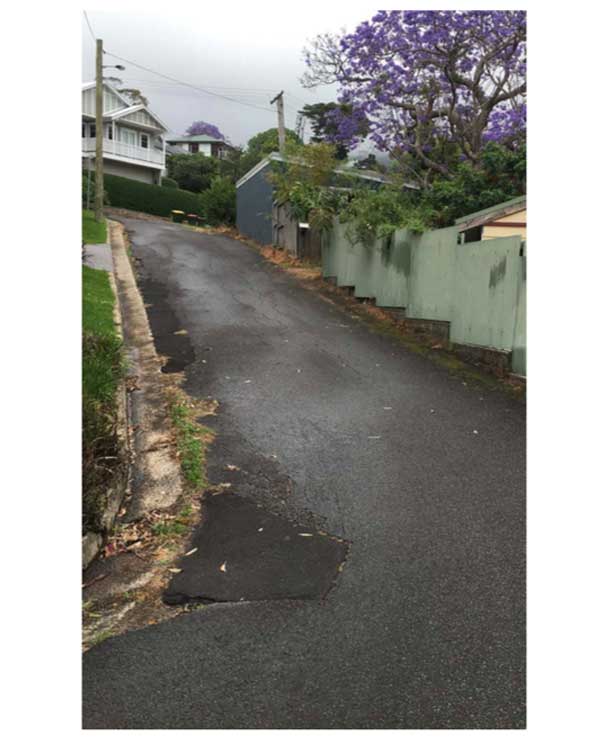 It can be argued that section of lane over which the occupant would need to drag the waste bins is almost impossible to negotiate. I measured the gradient of three locations on the section as shown above and determined that the average gradient is 1:7. This gradient is greater than the steepest section of the adjoining Bulli Pass. This is twice as steep as the maximum allowable 1:14 for safe bin transfer.

The yellow path is a design contraint imposed by the Applicant. With a redesign using access from the northern end of the two southern units, the yellow path for safe bin access could be around 50 metres with an almost level average gradient and a maximum gradient of 1:20. This route would be far safer and easier for the residents.

Also, ease of access to Thirroul is a crucial aspect of the amenity of this site. Google maps gives an estimate of the distance from 13 Pass Avenue to, say, the Ryans Hotel as 10 minutes and 750 Metres. Via Gum Tree Lane access is listed as 12 minutes and 850 Metres.

Consideration should be given to the fact that Gum Tree Lane no street lighting. The Lane is narrow with no footpaths or room to move off the Lane if a car drives through whilst being used for pedestrian access. The effect at night is frightening, like being trapped in a dark canyon.

It can be argued that the only solution for safe bin access and safe pedestrian access is to keep with the existing Pass Avenue access via a foot path along the side of the front unit.

We beleive the variations sought will have an adverse effect on the character or amenity of the local area. We do not see how these variations will lead to a better outcome from the development. Nor do we see how compliance with the applicable development standards with more suitable buildings could be considered unreasonable or unnecessary.

We do not see anything in the DA which leads us to beleive other than the sole reason behind these variations is to increase the saleable floor area and increase the profit from the development.

There are no nearby properties that are of a similar compact nature. Therefore it can be argued that the proposal is out of character with the surrounding locality. We beleive that this will directly lead to a loss in resale value for adjoining properties.

To us, it appears that the proposed subdivision is merely a way to circumvent local zoning standards, thus profitably packing in more buildings in a way that will increase the density and degrade the liveability of this location.

The proposal could establish a precedent whereby DCP or LEP standards are undermined therefore I respectfully request that Council reject all the variations in this application and suggest recommending to the applicant that he pursue buildings with a smaller footprint and safer pedestrian access, or less buildings on the same site.