Meeting opened at 4.20 pm. Minutes of the previous General Meeting of 15th of April 2018 had been distributed by email and were accepted as read.

Council advised by email that the stairs to McCauley Beach at the end of Corbett Avenue would be built in the location as planned. Our suggestion to move them a few metres north was not acted upon.

Council advised by letter that our concerns regarding LHD traffic congestion during St Michael's School pickup times would not be acted upon. Council felt that, given that the school children pickup process lasts at most 20 minutes, the inconvenience is not significant.

Several spoke to the issue and the meeting decided to pursue this matter via the local member and with NH3.

As there were no responses to the suggestion of investigating an alternate time to 4pm Sundays, TVC meetings will continue to be held at that time.

Joe Steller from Straight Talk, Contractors representing Anglicare, delivered a presentation on changes from the 2006 concept plans for the old Cookson/Plibrico site as shown by the map overleaf. 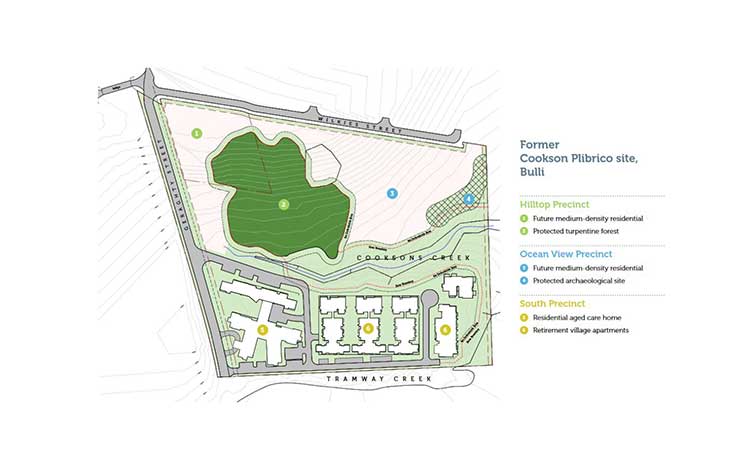 A question and answer session followed. Scheduling details and a time for commencement were not specified.

Zoning and densities of development are already set as R3, the same as the McCauley Beach Estate. It was suggested that consideration be given to the re-opening of the Sturdee Street Bridge.

Report from Jane Bunting on development at 178/180 LHD

Jane described the oversized Development Application for five 3 storey town houses uphill from her at 178/180 LHD. Jane spoke of many concerns regarding aspestos and all drainage flowing into Kellys Creek. It seems the Applicant resubmits the same faulty DA, knowing it will be sent to the WLPP committee for a final decision. Jane also spoke of the 5 year process it took to replace the failed supporting wall and subsequent land slip into her yard.

The meeting decided that the Secretary should send in a formal response to WCC objecting to the DA and organise other TVC members to do the same by sending out suggestions for suitable content.