WELCOME BY THE PRESIDENT
The President of the TVC welcomed all present and especially Councillor Janice Kershaw.

SECRETARIES REPORT
After the last Council Electon Murray wrote to a number of Ward 1 Councillors inviting them to the TVC meeting. Councillor Janice Kershaw agreed to join this meeting and speak. Councillor Leigh Colacino has not responded. Councillors Jennelle Rimmer and Mithra Cox have addressed the TVC at prior meetings.

There are a number of contentious DAs in which members of the TVC have been involved:

28 George St – This was originally rejected by the Wollongong Local Planning Panel (WLPP) on 13th February 2019 on a number of grounds. Subsequently the owners submitted revised plans and a second WLPP meeting was held on 16th October 2019. The WLPP determined that approval be deferred and that the amended plans be submitted and considered by Council staff and determination delegated to the Manager of Development Assessment and Certification. This DA has since been approved.

7 George St – This DA has been refused as the WLPP considered that the proposal failed to demonstrate consistency with the provisions of the Wollongong Development Control Plan 2009 in terms of Residential Development, Character Statements, Car Parking, Access, Servicing/Loading Facilities and Traffic Management, Landscaping, Heritage Management and Preservation, as well as Management of Trees and Vegetation.

34 Hewitts Ave – Members of the TVC held a street meeting to discuss residents concerns about the proposed development of 6 units on the Greens Bus Depot site. There are a number of concerns with this proposal as the land is flood prone. This is still under consideration by Council. Murray reported that an invitation to operate a stall at the Seaside and Arts Festival as in previous years was received. As this is a key promotional opportunity for the TVC this was left for the Executive to organise.

Correspondence since the last TVC meeting – Received 493 emails and sent 186.

Beach Precinct:
Ray reported that the inlet pipe for the pool has been replaced with noncorrosive piping. These repairs seem to have made a difference to the water quality in the pool. The section of the pool wall that was cracked has also been rebuilt. The contractors have also laid new grass in the area that was damagedduring the construction phase.

The Amy Monument located on the roundabout near Thirroul Pool has been slated to be relocated in front of the children’s play area. However, Ray has been informed that there is no money in the budget for this to happen this financial year.

Concerns were also raised about the skip bin near Martin Place as it was reported that there are rats living under it. Councillor Kershaw noted this and will raise this health issue with Council.

Graffiti Report:
It was reported that Council is quick to paint over the graffiti – especially around Thomas Gibson Park, Station Street and the Railway. It was suggested that the mural near St Michael’s School be painted over in black as this now has graffiti over it. The Council has been contacted and they stated that repainting is not in their current budget.

There was a suggestion that there be a competition held by the Seaside and Arts Festival to repaint thiswall. It was suggested that the TVC could provide the paint as there is money in the budget. If anyone has any suggestion Murray can be contacted.

Jo Holder said that Council has a public art officer and committee that could be contacted. The original mural was done by Council in association with the Neighbourhood Centre that was located nearby.

Bill Posting:
A large number of bills that have been posted on power poles have recently been removed by TVC members. Discussions with the Endeavour Energy confirmed that it is illegal to place bill posts on power poles. When sticky tape is used then removal is easy, but of particular concern are posters that are pasted onto poles with wall paper glue. These prove difficult to remove and often remain on the poles well after the event has taken place. Also of concern are the ads that are attached to the wire fence on Lawrence Hargrave Drive leading up to the bridge. It was agreed that the appropriate action was zero tolerance to the best of our ability.

Guest Speaker – Councillor Janice Kershaw:
Councillor Kershaw apologised that she could not attend the previous meeting as had a previous engagement.

Councillor Kershaw stated that there is to be a Planning Day on 7 December when Councillors get together and are able to suggest any major projects – eg. replacement of soft fall surface in playground. Councillor Kershaw is happy to take any suggestions on our wish list to Council. The relocation of the Amy Monument was suggested. The main areas of interest that will be covered by Councillor Kershaw today are Traffic and Development.

Traffic
Councillor Kershaw encouraged everyone present to look at the proposed road closure around Stanwell Park and provide feedback on the RMS site (below) by 16 December 2019 as the closure will impact upon everyone residing north of Bulli Pass. There are 4 options from which to choose. https://www.rms.nsw.gov.au/projects/lawrence-hargrave-drive-closures/index.html

The issue of noisy motor bikes was discussed. The RMS use to monitor noise, but no longer do this. The RMS use to have inspection stations set up which meant an automatic fine if caught and a defect notice issued. Apparently the RMS now works with the Environment Protection Authority (EPA) on noise. It is not a Police matter. Councillor Kershaw stated that Council are just as frustrated with the noise as the locals. A petition was discussed but this was not endorsed by the meeting. Councillor Kershaw explained that there is a traffic committee at WCC for general traffic issues. There is a representative of each of the Bus Association, Police, RMS, State members and Council employees. She believed that there is a Councillor who observes this committee. Councillor Kershaw said she would get back with the name of this Councillor.
RESPONSE: There is no Councillor on this Committee.

It was noted that the Beach Link Road from Thirroul to Sandon Point first appeared on local Maps 50 years. This road, in various permutation has never been built. There are numerous reasons, primarily relating to the value of foreshore land.

Development
The revised DA for the Anglicare development reduced the number of independent living units and aged care beds while adding 55 houses to the development. This DA has gone to Council and is now with the Dept of Planning for its consideration and approval. On 19 September the Dept of Planning requested additional information. A separate DA was lodged with Council recently to demolish the current buildings on the Cookson Factory site and the old milk distribution facility.

Councillor Kershaw stated that Council has a number of concerns with the Anglicare proposal as it has changed from primarily an aged care facility to residential; hence there will be more active movements from the site. Council has also highlighted that part of the condition for approval was the development of a link road – bridge over Tramway Creek. Council is watching this development closely.

Concern was expressed about the movement of traffic going along Wrexham Road during theconstruction phase. There was a suggestion that the Sturdee Avenue Bridge could be reopened during the demolition phase to reduce the traffic movements near housing and reduce potential spillage of hazardous material.

Councillor Kershaw stated that the State Government is increasing new housing around the State. Wollongong Council is taking a strategic approach to Housing Development in the new DCP which is currently under review. This strategy will be approved by Councillors then sent to the community before final strategy being sent to the State Government. The Council hopes to get back to the community with
its strategy by mid June 2020. In relation to this DCP review Councillor Kershaw stated she would get back to the TVC with information and the steps to take. There are questions about how much emphasis the Council puts on the character of the area, as outlined in the current DCP. Councillor Kershaw said she would seek clarification about this.

Concerns about current DAs:
Jose Jones
A local resident spoke about concerns she and neighbours have in relation to the proposed DA for Jose Jones. Apparently there are concerns relating to the noise from the restaurant and the proposed extension of trading hours – up to 12am Thursday to Sunday. In addition there are concerns about the accommodation at the rear of the property and across the road for backpackers as there is a lot of noise from these sites. The DA goes before the WLPP on Wednesday 4 December 2019.

In addition the neighbours have noticed a number of abandoned cars in the area. In one case the Police have inspected the vehicle and the rego plates were removed, but the car is still there. It was reported that this is happening in other parts of Thirroul. Need to find out what the abandoned car policy is and who is responsible. Councillor Kershaw offered to follow up on this and the noise issue and get back to Murray (See Appendix 2).

General Business
A DA proposal has been lodged with Council for 16 dwellings to be built near the Coledale Hospital closeto the railway line. Apparently 40,000 cubic metres of soil is to be removed from the site. This will be a significant issue for traffic on Lawrence Hargrave Drive during the construction phase. Access to and from the site will be of concern once construction has been completed. The DA is on exhibition via the Council website until 6 December 2019 (DA 2019/1198). Approval of this DA will certainly add to an already congested roadway.

There is also an online petition. The link to this will be sent to Murray for distribution. (It has not arrived)

Merry Christmas and Happy New Year was extended to all present. 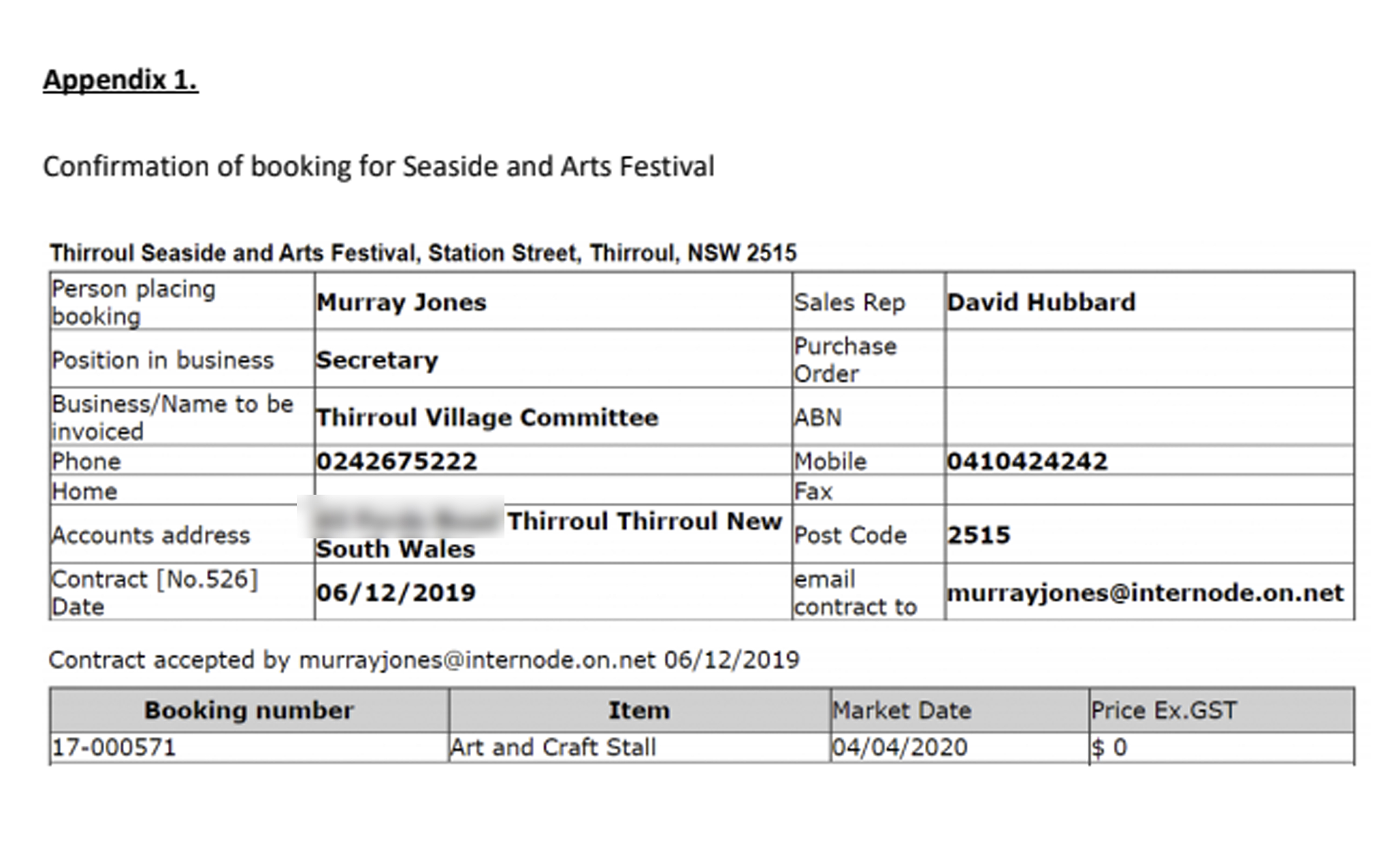 Just want to give you some answers to the questions raised the other Sunday.

I don’t have them all yet, however I don’t want to fall behind.

1. Painting the Pumphouse. It is programmed to be painted after the school holidays (Feb/March 2020). There is also other work to be completed at the same time, such as the replacing of the internal and external stairs.

3. Moving of the Monument at the round about to the park
There is $42,000 allocated for this to occur. If it does not be end of this financial year it will definitely be by the end of next year.

4. Abandoned car High St, Thirroul.
This has now been removed.

5. Reopen Beatie Ave over the railway bridge, only for trucks if the DA is approved for the demolition of the buildings on the Cookson site. I have spoken to the Manager of Planning, who has passed this onto the planner who is assessing this matter.

6. Change DCP to give Village Character greater importance.
DCP provisions will have stronger strategic merit if they support and are consistent with higher strategic planning work, which is currently being undertaken by council

7. What councillors are on the traffic committee.
There are no councillor representation on the Traffic Committee.

I will send you a further email when I get the remainder of the information.

Could you please pass this information onto the committee members.