Minutes of the general meeting held on Sunday 8th February 2015

The general meeting commenced at 4.00 pm.

The minutes of the AGM and normal meetings of the 2nd of November 2014 as previously distributed to members via email and were accepted as read without amendment.

Murray sought permission from attendees to record the meetings on his phone so as to facilitate the preparation of Minutes.  Any recordings would be deleted immediately after preparation of the minutes.  There were no objections to this procedure being adopted.

Murray moved that the signatories on the TVC’s Commonwealth Bank Account number 10056337 be as voted for at the previous meeting.  These are
1. Andrew John Mebberson
2. Paul Tuckerman
3. Murray Ord Jones
Any two signatories must sign to authorise a cheque.  The motion was passed.

Correspondence from Annette Jones, Judy Bourke, Christine Hill regarding the Rail Parking issue was put aside for later in the meeting.

A brochure for the Thirroul Readers and Writers Festival to be held at the Thirroul Community Centre on the weekend of 7/8 March was received.  For details, email This email address is being protected from spambots. You need JavaScript enabled to view it. or visit thirroulreadersandwritersfestival.org.

Business on notice
Finalisation of the Headlands Hotel redevelopment
Murray Reported on IHAP meeting held on the 4th of November and attended by Lynne Jones, Sylvia Wishart and Murray Jones.  The developers sought Council permission to merge and then subdivide the individual housing lots into two large lots. This permission was granted by Council subject to scrutiny by the IHAP panel.  The developers already had approval for the development.    Several spoke against the subdivision.
The main concern was that the headland was zoned for tourism and that this complex of 63 apartments could be sold for residential purposes. The developer spoke and gave assurances that the apartments would only be sold as serviced apartments and an external agent, possibly Peppers Resorts, would be managing the units on behalf of the owners.

The IHAP panel gave approval to the subdivision.  This was the last step holding up the building application.

Sydney Trains plan for the 150 car parking facility
The letters received on this matter to date expressed reservations about the location of the carpark and the distance required to walk to/from.

Extensive discussions ensued and the following was resolved to be sent to local Members of Parliament and the Mercury.  This is not an exact record of discussions, but rather the results of those discussions in letter form suitable for a press release and despatch to our State Representatives.

The committee wish to express their reservations about the location of the additional 150 parking spaces for commuter parking in Thirroul.  We are concerned about the location as a safe and suitable carpark because;
1) There are security concerns with its remote location from roads and housing.
2) Current road access to the proposed parking area is in an east west direction across a crest.  This gives a poor line of sight. Also drivers will be vision impaired during its busiest usage period at sunrise and sunset,.
3) Pedestrian access to/from the carpark is across a hill.  This presents difficulties for the aged, disabled and those with prams.
4) According to Google maps, there is a 450 metre walk to the station across two and possibly three roads depending on the route. This will at a minimum require
1. footpath upgrades to all weather surface,
2. new pedestrian crossings,
3. improved street lighting and
4. improved road marking

An additional concern is that parking time restrictions will need to be introduced into Thirroul streets within 500 metres of the station, with residents exempt from these time restrictions.  Without this, the early commuters will still occupy all the street parking. Parking time restrictions creates policing and parking issues like;
• how many permits per house?
• Who bears the administration cost?
• Who issues and enforces permits?

Discussion with State Rail and local MP where timetabling had been discussed, the constant response was a very concerning lack of interest in reviewing or amending time tables .Throw away lines such as “well we’ll go back to the past” and “do you just want the same as before” are very tiresome and we expect better from elected officials and those in the employ of the public.

There is a complete lack of acceptance that the scheduling that has been introduced is creating a range of issues impacting not just on commuters but the wider community with impact on commercial traders and residents. Now the faster timetable can be implements but surely only after the issues it causes are rectified.  The following issues need to be addressed in order.

Wollongong’s B grade service. Once South Coast Express services reach the Sydney rail network their priority needs to be returned to the same level as express trains from Katomba and Newcastle.  Express services from these locations do not stop at minor Sydney stations, and only set down at the major stops. Oatley should not be a stop for Express Services from Wollongong.

Northern Illawarra’s B grade Service Please drop off and pick up commuters at the same platform.   Previously commuters from feeder trains disembarked on the same platform as the express train.  They are now required to walk from platform 3 up, across and down the bridge to platform 1.  This is reduced level of service is unpleasant especially on windy winter mornings.  The patron’s comfort is more important than the short amount of time this supposedly saves.

Safety issues at Helensburgh. Helensburgh is unsuitable as express transfer station and should be replaced by Waterfall.  Its remote location causes significant safety issues. Single woman travelling to destinations between Thirroul and Wollongong are refusing to change trains at Helensburgh. They stay on express trains, leaving them with an 18 minutes wait to connect at Thirroul.  This is an unacceptably inconvenient and unpleasant length of time.

Use existing Commuter Parking.  Express trains again need to alternately stop at Bulli and Austinmer, to utilise new adequate parking, 100+ spaces, already provided by NSW Government at Bulli and Austinmer.  The time can be made up by not stopping at Oatley.  These car parks can be phased out when a Bus/Rail interchange is established at Thirroul.

Use spare railway land adjacent to the station for parking. An unused section of NSW Rail property between Thirroul Station and Gibson Park should be handed over to WCC for parking space. We believe we receive a commitment to proceed on this issue from Lee Evans and Candice Heine in June 1014. This is suggested in the 2004 DCP for Thirroul.

Establish Bus/train interchange. As suggested in the 2004 DCP, the Thirroul Transport Hub requires better connectivity between trains and buses.  Please build the 80 metre single bus lane on spare land from Wrexham Road.  This will allow local bus companies to augment the express services.

It appears the current political and state rail management plan is to respond to this difficulty with another layer of complexity without dealing with the initial root cause.
The TVC has concerns that those responsible for the rescheduling are unable and/or unwilling to address and correct the problems that have been created.

We are concerned that any public transport policy that requires increases to the
• use of private cars,
• distance that these private cars are required to be driven
• allocation of public land to additional car parks

whilst newly built car park areas are being left empty , is a policy that is seriously flawed . Would it not be more cost effective for the Minister for Transport to address the issues which have caused the increase in parking load?

Now the TVC does agree that it is good to see the Minister for Transport recognise that there is a parking problem in Thirroul and attempt to do something about it.  We ask the Minister to consider the above issues and then, if her decision is to proceed with this 150 car park option, then, whilst waiting for the additional parking to become available, could express trains pick up and drop off, alternately at Bulli and Austinmer stations?


TVC Involvement in the Thirroul Seaside and Arts Festival.
The aim of involvement was agreed as an opportunity to promote TVC and seek assistance from those who could help with Gardening, Anti-Graffiti and website advertising. We would require manning in three shifts – from 9am to midday and from midday to 3pm.  Gary Chapman offed to act as coordinator for the festival.  Murray mentioned Peter Spencers offer of assistance with preparation of photos.  Requirements were listed as a 3x3 marquee, signs, sandwich boards, clip boards, table, chairs and photos.

General Business
Ross Dearden asked if anyone had received a flyer apparently distributed by Ray Hanna requesting that WCC purchase his large block of land as shown here.  This issue will be discussed at the NIRAG meeting this coming Tuesday. 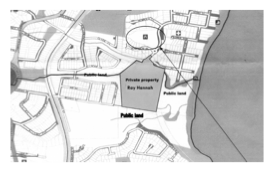